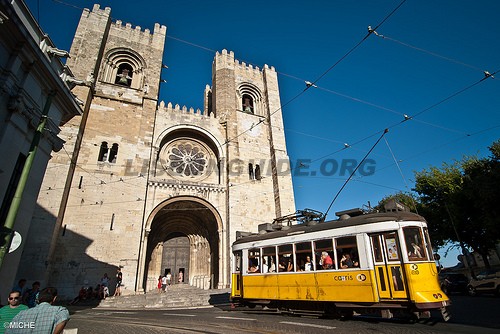 The Sé, the Cathedral of Lisbon, is one of the most seasoned structures in the city, initially built in the twelfth century soon after the reconquest of the city. The basilica, with its solid Romanesque towers, is one of the Lisbon’s most notable historic points.

Development of the Sé began around 1150, just three years after the city was reconquered from the Moors amid the Second Crusade. Not long after the triumph the Englishman Gilbert of Hastings was named priest of the city of Lisbon. With the backing of king Afonso Henriques he set out to sanitize the city and construct a Catholic church at the site of a mosque.

Notwithstanding numerous changes throughout the hundreds of years, the congregation has held its unique Romanesque character. Its current appearance stems for the most part from the rebuilding work finished in the early twentieth century, when Baroque embellishments from the eighteenth century were uprooted and the rose window was recreated. Like most holy places in Lisbon, the Sé endured critical harm amid the lamentable seismic tremor of 1755, when the south tower broken down and a great part of the inside was annihilated.

The inside, laid out as a Latin cross, is somewhat somber. A focal Romanesque nave secured with a barrel vault is flanked by two paths. The churches along the walkways and the walking are Gothic in style. There are a few tombs in the house of God, the most outstanding of which is the flawlessly etched tomb of Lopo Fernandes Pacheco and his wife in the seventh sanctuary, the Capela de Santo Ildefonso.

A silver coffin in the sacristy is said to hold the remaining parts of St. Vincent of Saragossa, supporter paragon of piety of Lisbon. As per legend, ravens shielded the example of piety’s body from wild creatures after his passing in the early fourth century. They supposedly even watched the pontoon that shipped his body in 1173 from Cape St. Vincent to Lisbon and made a home in one of the church’s towers after the landing. Ravens turned into an image of the city of Lisbon and relatives of these ravens existed close to the basilica until 1978.